As labor shortage, we had to shut down the phone call service temporarily. Email Online Chat Are Available

As labor shortage, we had to shut down the phone call service temporarily. Email Online Chat Are Available 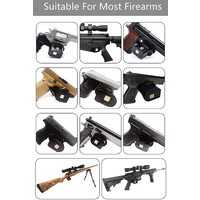 Epic Shot Sports recently asked us to review one of their new trigger locks that use fingerprint recognition technology rather than the more traditional key system. Selling at $129.00, this offers a uniquely personal means of securing one’s guns.  While people lose keys every day, one’s finger is usually more difficult to misplace! It should be made clear at the outset though, that any form of trigger lock in no way obviates the need for storing firearms unloaded, in a secure safe, as required by local legislation.

The idea of safely disabling a firearm so that others may not fire it can add a level of confidence to one’s gun security, whether at home, on the range while the gun is in the car or even off on a hunting trip when guns are nearby but unattended in camp. Having said that, it should also be understood that this is a trigger lock, so it merely locks the trigger. No form of lock should ever be applied to a firearm that is ready to fire (i.e. loaded and cocked), since immobilizing the trigger offers no guarantee that a discharge will not occur if the gun is knocked or dropped!

Mechanically the fingerprint lock works in the same way as the conventional keyed style, by having two interlocking pieces that click together, oyster shell style, over the trigger guard of the firearm. This prevents the trigger from being accessed, thereby rendering the firearm inoperable. The side with the electronic sensor features a socket into which the pin on the opposite side locks when they are pushed together around the trigger guard. The internal pieces each have a rubber escutcheon with small projecting fingers, while the pin side has six spring loaded projecting metal pins of 4.5mm diameter that protrude through holes in the gasket, firmly against the other side when engaged to ensure secure lockup.

Using an internal 300 mAh polymer lithium battery, the lock features a 360 degree fingerprint recognition window that can store up to ten different fingerprint profiles. The battery stand-by time is claimed to be 3 months and the device can operate 1000 times from a single charge before requiring recharging from a USB port. The lock itself has a micro-USB socket and comes with a 300mm charging cable as well as a manual key and a 2mm diameter metal setting probe used for programming the system.

The fingerprint recognition window is 10mm square and is claimed to recognise previously registered fingerprints in a time of under 0.3 seconds. Its internal sensor electronics draw a current of just 2 microamps on standby and 20 milliamps when in operation.

The initial setup instructions must be followed exactly, and some repetition may be needed to “teach” the unit to recognise each fingerprint. Straight out of the box the device will be locked, so it must firstly be unlocked into its two halves using the manual key. The rubber escutcheon on the fingerprint panel half of the lock is carefully pulled off to reveal the socket into which the lock pin on the other half engages and the tiny “set” hole into which the programming probe is inserted. The 12mm diameter locking pin features a miniature rack with about twenty teeth. At the mouth of the socket is a similar looking rack with its seven teeth facing in the opposite direction. This is spring loaded so that when the locking pin enters the socket it is locked in. When the appropriate fingerprint is pressed onto the recognition window a tiny buzzing sound is made and the internal solenoid pulls the seven toothed rack outwards to unlock the device.

On the side opposite the seven toothed locking rack is a tiny hole marked “set” into which the 2mm setting probe is pushed in order to “teach” the unit to recognise various fingerprints. The first set up involves setting up the “administrator profile” (for most users this will be the only person able to open the lock due to legislative requirements in most states). Pressing the “set” button for one second causes the blue light to flash. The user must place the finger onto the window and release it. This step is repeated six times, after which the initial fingerprint is registered. Each of these six operations should involve shifting the fingerprint slightly so that the memory of the system recognises that fingerprint from a variety of different angles. If the red light comes on, the whole process must be repeated. Up to nine further users can then be registered, which may be useful for, say, club or security use with a shared firearm. For this, the administrator presses the finger onto the window and the blue light comes on, then the new fingerprint is registered within six seconds, and likewise repeated six times to permit the second and subsequent prints to operate the lock.

I found the setting up process a little tedious perhaps because my skin is relatively dry and my fingerprints worn down through my regular work. Nevertheless, I was able to “teach” the device to recognise two of my fingerprints. I found that the lock would easily fit rifles, shotguns and both revolvers and self-loading handguns, although it probably wouldn’t be of much use with certain lever action firearms.

Add your favourites to cart

Your purchase will be split into 4 payments, payable every 2 weeks

All you need to apply is to have a debit or credit card, to be over 18 years of age, and to be a resident of country offering Afterpay

Late fees and additional eligibility criteria apply. The first payment may be due at the time of purchase
For complete terms visit afterpay.com/terms